On International Women’s Day, we honour the actions of Tracey Mallaughan and Bells, who on Friday 5th March were sentenced to 14 days in prison for contempt of court, as they glued themselves on during Bells’ hearing. 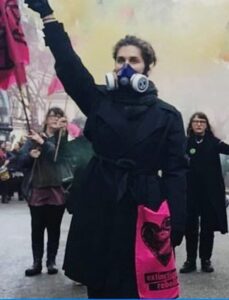 Prior to her hearing, Bells said

“I am choosing to disobey in the dock because it’s not ok for magistrates to repeatidly say they don’t dispute the science but leave no room for that science in the Court room. The Courts are criminilising people taking parts in environmental protests, people like you and me.”

“In the last few years the UK has seen soaring temperatures, towns preparing to be decommissioned from rising oceans, wildfires and growing deaths from toxic air pollution. This is all happening against a backdrop of the highest courts in the UK giving the green light to large carbon intensive infrastructure projects, such as plans for the third runway at Heathrow, a new coal mine in Cumbria, and the vanity project that is HS2. These projects are set to lock in 2 degrees of global warming – which will be catastrophic for all life on earth.”

“Taking this action today is a scary prospect which may result in loss of liberty and consequences not presently known to myself. I am acting because I have the choice, when so many in the UK and in the countries that are on the frontline of the climate and ecological emergency do not. Those who can now must act to change the systems that are causing death and destruction around the world.” 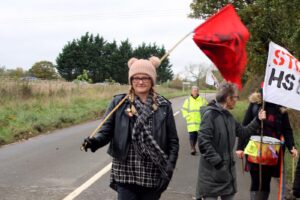 ng to disobey in the dock because I love my children very much and something has gone horribly wrong. People are stuck playing business as usual while our planet burns. They will call it contempt of court and put me in prison but I don’t do this out of contempt, I do this out of love.”

Their courage, strength and relentless determination is humbling and we’re incredibly grateful for their unapologetic rebellious spirit ❤️✊❤️

We give thanks to Bells, Tracey and all the female environmental protectors worldwide giving up their safety and freedom to protect all life.