On Thursday 17 March, climate campaigners Extinction Rebellion Lambeth and other local campaign groups held a rally in Windrush Square to remind the council of their commitment to protect and improve the lives of residents and workers by acting on the climate emergency.

The speakers, from Lambeth Unison and RMT as well as local campaign groups including Beyond Politics, Fuel Poverty Action, Save Central Hill, Groundswell Ecosystems, Healthy Living Platform, spoke about their actions on climate-related issues including housing, air pollution, waste and workers’ rights. 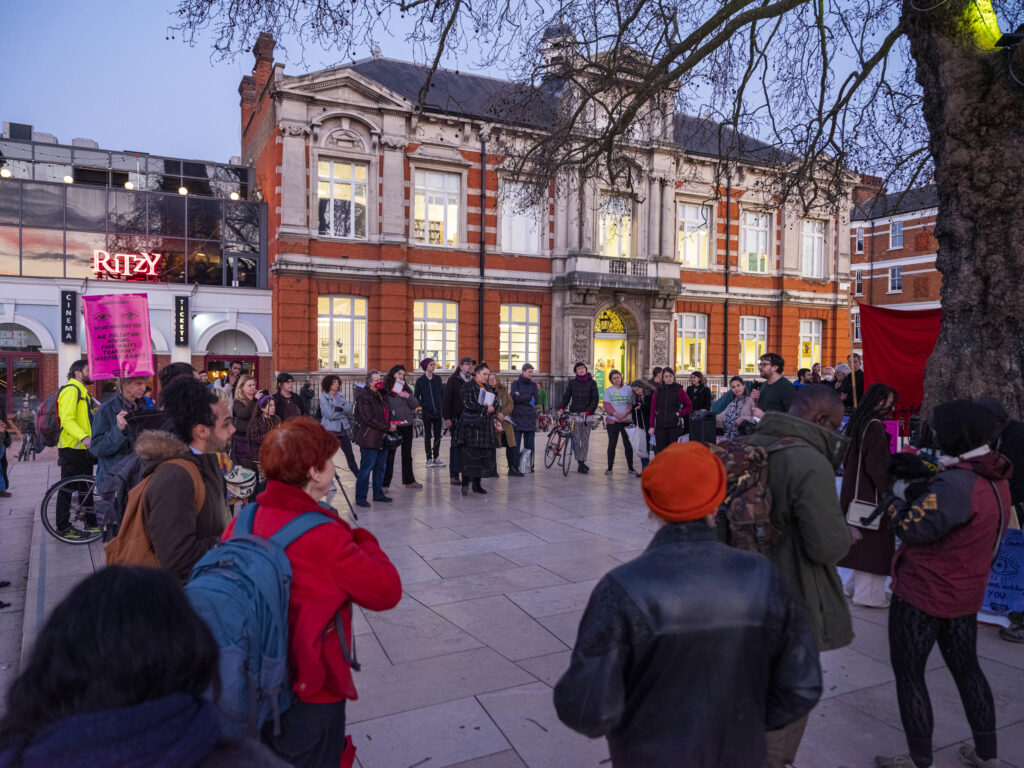 Zaz, from Extinction Rebellion Lambeth opened the rally, welcoming the release of the Climate Action Plan but condemning the actions of Lambeth Council ‘from the destruction of estates to the privatisation of public spaces including parks, and including the felling of mature trees in Clapham, and car parking subsidies, that go against the goals set for each area identified in the Climate Action Plan. This’, she said ‘in turns impacts majoritarily the most vulnerable and destroys the trust between the council and its residents’.

Neil Sheppeck, representing Beyond Politics, a scrutiny committee for the Lambeth Citizens’ Assembly made up of local green organisations also commented on the CAP: “A wish list rather than a plan.  There’s no mention of yearly targets, monitoring, data gathering , Comms etc – and an admittance that net zero target by 2030 is unlikely to be met by 2050 with ‘billions of pounds’ needed.”

With regards to housing, Sabine Mairey, who runs the Save Central Hill campaign said: ‘Demolition and rebuilding is a huge cost for communities and the environment.  Unbelievably, Lambeth is buiĺding back less social housing than already exists on the six estates. And they say that this is to house the homeless!’ 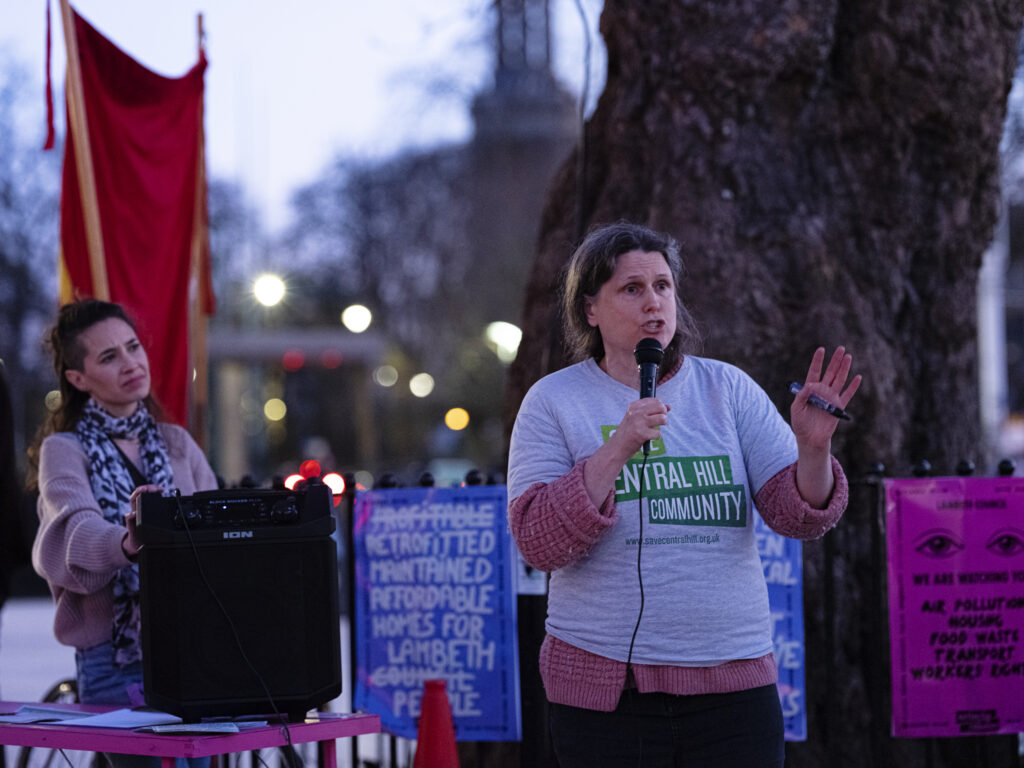 This was echoed by Nicola Kench from Groundswell Ecosystems:

“There is simply no way that plans to demolish and rebuild 6 estates can possibly be in line with any reasonable or feasible local Lambeth climate emergency strategy – the ‘cost’ of embodied carbon is too high. As Carl Elefante, the ex-president of the American Institute of Architects said, famously, ‘the greenest building is the building that already exists’. Lambeth needs to stand to attention in the light of global trends and architectural practice – respect embodied carbon and retrofit first, at scale.”

Simon Hannah from Lambeth Unison, a trade union that represents over 1,200 Lambeth council workers, highlighted the need for the government to allocate additional funding: ‘Lambeth estimates that retrofitting all homes in the borough will cost £3.4bn. After a decade of budget cuts, Lambeth doesn’t have the resources to implement all the climate policies it needs to really green the borough. That is why it’s not just about demands on Lambeth but demands on the central government in Westminster to restore all funding lost since 2010.’ 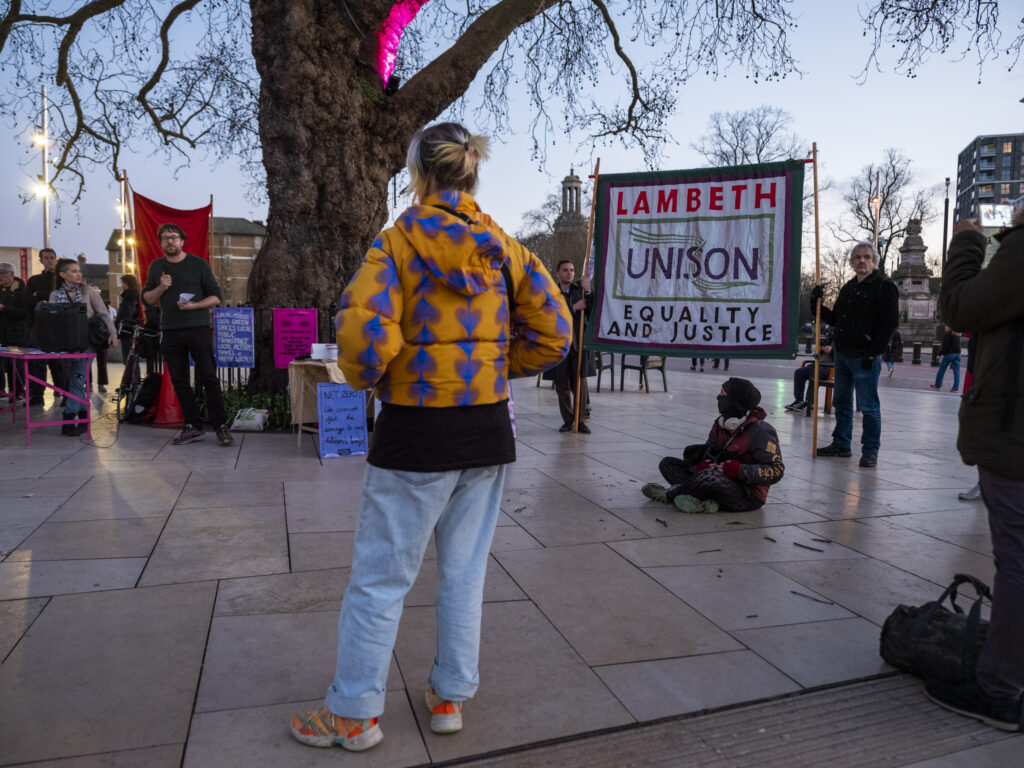 “A publicly funded, affordable and green public transport network is essential if we are really going to tackle the climate crisis.Protests like this are very important, and strike action can have an even bigger impact in putting pressure and winning the necessary resources to really progress on social justice as well as climate justice. I want to see more trade unionists at climate demonstrations and more climate activists joining our picket lines.”

Diane Skidmore, from Fuel Poverty Action, was cheered by the crowd when she demanded Energy for All to reduce inequalities, giving everyone a free amount of energy to cover the basics like heating, cooking, and lighting, and urging the Government to introduce a Windfall Tax on the profits of oil and gas, and to stop  subsidising fossil fuels. 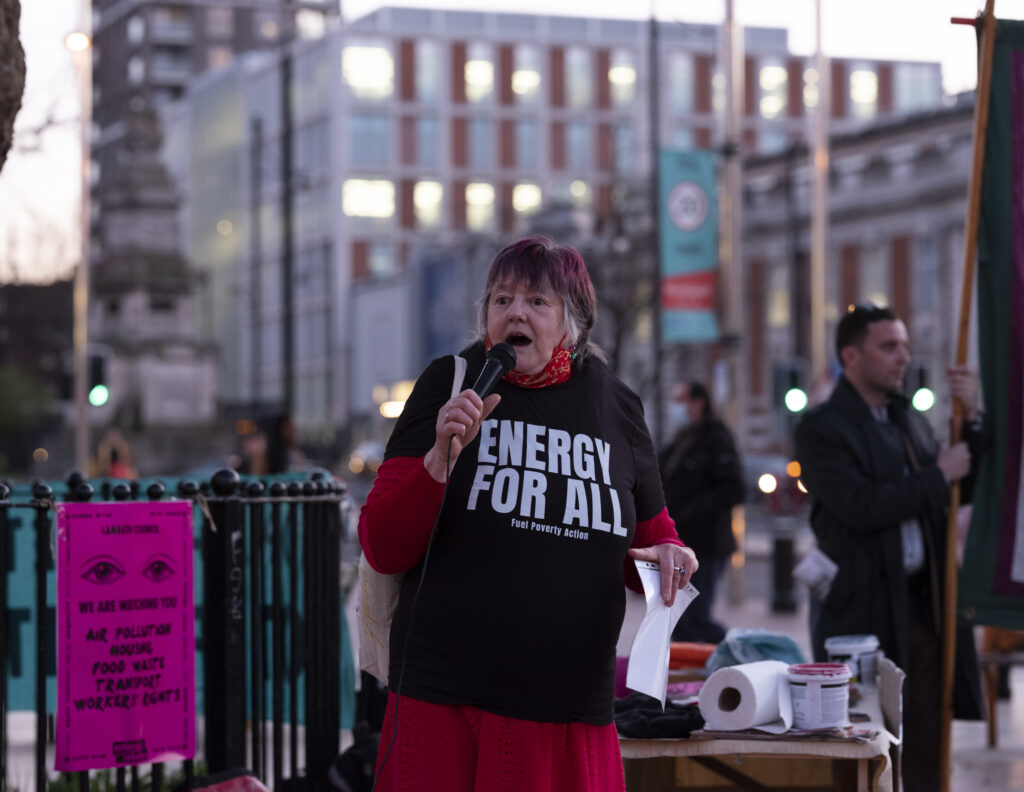 Sue Sheehan from Healthy Living Platform, talked about how food is usually overlooked when it comes to carbon emissions, highlighting that it globally pollutes more than transport, and expressed concern at the fact that it was barely mentioned in the CAP.

“Food is a climate issue, it’s an equality issue, a social issue, and it’s a health issue. But the really good thing about food is that the solutions to all these issues are the same”

The event was closed by Extinction Rebellion’s co-founder Clare Farell, who reflected on what was shared by local campaigners and invited everyone to take action locally and nationally by joining the next Rebellion starting on the 9th of April.