On Sunday members of XR Lambeth paid a visit to the Science Museum’s Our Future Planet exhibition to highlight Shell’s attempt at cleaning up their well-deserved reputation of worst climate offenders by sponsoring this exhibition. They carried out three actions to call for the museum to drop them as sponsors.

The Science Museum has inspired generations of children and adults with a love of the natural world. Now more than ever, we need an inspiring and ethical vision of the future. We need our Museum to tell its beautiful and powerful stories with integrity.

Scientists for Extinction Rebellion say:
The utter failure of governments and corporate interests to reverse destructive impacts on the planet’s survival systems threatens our civilisation and much of life on Earth. Shell continues to play a key role in the escalating crisis, but they are clear that their business depends on a societal licence to operate, Funding exhibitions allows Shell to borrow the prestige and implied endorsement of the Science Museum Group.

So why on earth is their exhibition on the climate emergency “Our Future Planet” sponsored by Shell?
The management of the Science Museum is not listening to the youth, the scientists, the public or even their own staff who all want the Museum to cut financial ties with fossil fuel companies.

As a response XRL decided to organise their own actions in support of the various movements including UKCSN, Culture Unstained and XR among others:

Spoof adverts for the exhibition based on the museum’s own website were placed in bus shelters to highlight both the content of the exhibition – carbon capture and storage (CCS), an expensive and yet unproven approach at scale- and its sponsorship by climate offender Shell. 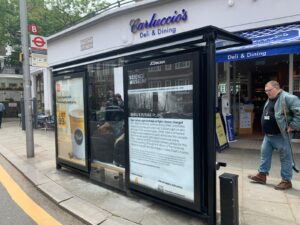 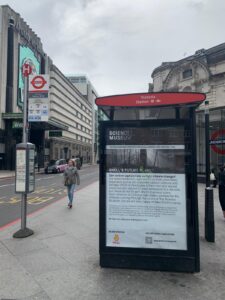 Silent performance inside the exhibition:

Rebels walked around the exhibition and performed in silence, wearing t-shirts reading “No Future Planet – Funded by Shell” as a reference to the exhibition’s name, Our Future Planet.  The back read #ShellOut, one of the hasthags used by XR in this campaign. This attracted a lot of attention from visitors whom our outreach rebels got to engage with to explain why we were here and what they could do to support. It was very heartwarming to see many parents explaining to their children how Shell were the bad guys polluting our planet and that we were trying to draw attention to this. 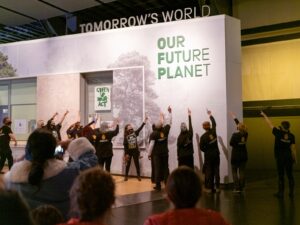 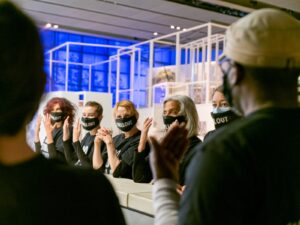 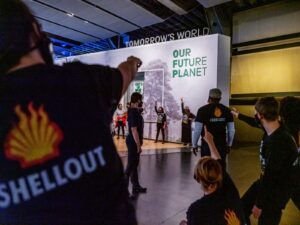 Noise and dance outside the museum

We then joined the fantastic XR drummers who had been warming up the crowd outside and performed two routines, still wearing our t-shirts. We were joined by more rebels and entertained the visitors queue and curious passersby. We also chanted “Shell Out” and called for the museum to drop their sponsorship. We may have inadvertently performed a rain dance as you can see in the pictures, but a little bit of rain is not enough to dampen ou spirits and determination!

Tell the Truth
We demand that the Science Museum Group immediately declare a climate and ecological emergency and reconsider its role in society accordingly.

Act Now
We demand that the Science Museum Group cut financial ties with all fossil fuel companies and publicly denounce their persistent mischaracterisation of the science of climate change in the strongest possible terms.

Want more information and/or take action? Here is a link to useful resources and calls to action: https://linktr.ee/stopshell

You can also join  XR Lambeth to keep informed about upcoming actions: we have Whatsapp broadcast channel and South London action group, which may be good places to start.