Harriet, Nancy and Jason took part in XR’s Rebellion of One action on Saturday 1st May. They sat and stopped traffic in Clapham and Brixton.  Here are a few pictures and their statements  on why they did it.

I wish I didn’t have to sit here today but it has reached the stage where I feel that I have no other choice. Science shows that we are close to a cliff edge. Our government’s lack of action to tackle the climate crisis will have consequences far beyond their remaining time in power.
The thought of living in a world where there is nothing that can be done to stop a climate disaster makes me feel completely hopeless, and so sitting today is my own small protest against this terrifying future 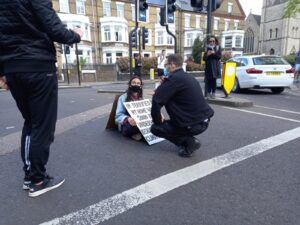 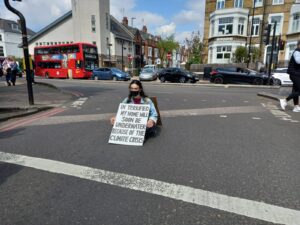 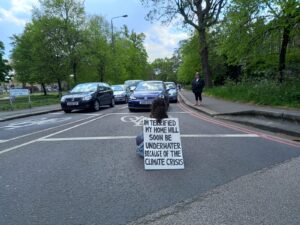 We know that time is running out to prevent the worst effects of climate change. That’s horrifying, it’s really frightening, but what scares me more is the thought of having to come to terms with the knowledge that we are out of time. I don’t know how I would get out of bed in the morning or bring up my kids in a world without hope. And right now that’s where our leaders are taking us. 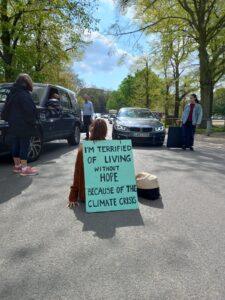 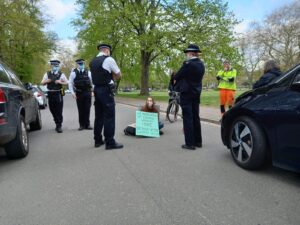 We have signed petitions, we have emailed MPs, we have marched across the country and what has the UK government done? They have invested £27bn in new roads[i], they are cutting air passenger duty on domestic flights[ii] and they spending 32 times more on fossil fuels than renewables[iii].

My decision to sit in the road is not something I have come to easily. It could impact my family, my job, and my future but that is nothing compared to the impact the climate crisis is having and will continue to have, on our planet. And if I can inspire just one other person to take action, it will have been worth it. 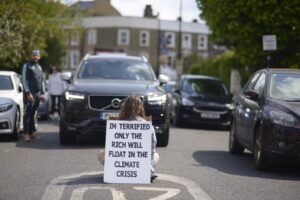 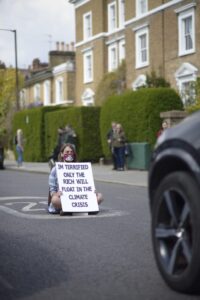 Harriet, Nancy and Jason are three of the five Lambeth Rebels who took part in the wave of lone road blocking being carried out by thousands of rebels across the country, and the world, to raise the alarm that government and business are completely failing to match their promises to cut CO2 emissions with radical and urgent plans to do so.

The nationwide actions were staged to mark the second anniversary of Parliament’s Declaration of a Climate Emergency. Boris Johnson recently announced that the UK would ‘toughen’ its climate targets, pledging to cut emissions by 78% by 2035, compared to 1990 levels.

‘The Prime Minister is making big promises, but two years have passed since Parliament declared a climate emergency and he and his government have done almost nothing to head off the very worst impacts of the crisis – drought, crop failures and war,’ says XR Lambeth spokesperson John.

‘In fact, they’ve launched a massive new road building campaign and given permission for a new coal mine, airport expansions and more oil drilling in the North Sea.

So, rebels in Lambeth, across the country, and across the world, have decided to literally use their bodies to signal to those in power that they need to take urgent action before it’s too late.

‘Imagine the level of desperation these brave people are feeling to sit, alone and vulnerable, in the middle of the road, blocking often angry motorists.

‘There is absolutely no way that anyone would do something as scary as this if they felt there was any other way to make the people in power take action over a crisis that threatens to destroy all of our futures.’ Three XR Lambeth rebels were arrested.