Katie  and Hannah took part in XR’s Rebellion of One action on Saturday 1st May. They sat and stopped traffic on Abbeville Road, Clapham. Here a few pictures and their statements  on why they did it.

The climate crisis is terrifying. It creates unfairness and cruelty. All I have to fight it is this tiny act – me sitting quietly in a road asking the people in power to stop listening to lobbyists and big business and listen to the science instead. 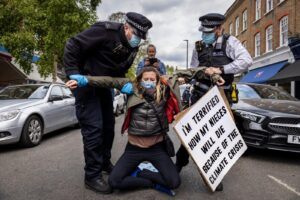 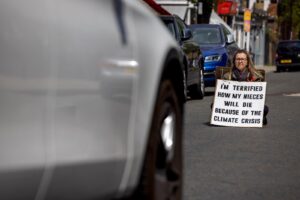 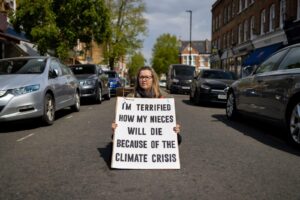 I am sitting in the road as an act of peaceful civil disobedience, which you might see as crazy, disruptive and annoying. To be honest it fills me with terror to sit in this road. What if a car runs me over, what if an angry driver hits me or drags me out of the road? I am a wife and mother of three so I don’t undertake this action lightly.

Peaceful civil disobedience is designed to create a dilemma and to open a conversation. I hope my action today will trigger a few conversations and will be an invitation to others to stand up and act in the greatest challenge humanity has ever faced – climate and ecological breakdown on a grand scale (* without non violent civil disobedience we would not have the won the vote, civil rights, gay rights or an end to apartheid. Bear with the inconvenience, I won’t be here for long – the police will soon move or arrest me).

I am terrified that our leaders have no plan. The Public Accounts Committee (PAC) says ministers have “no plan” to meet our climate targets, two years after setting them in law. There is no green revolution in Sunak’s budget. Today is the second anniversary since Parliament declared a Climate and Ecological Emergency and since then nothing has happened. 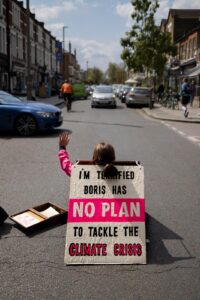 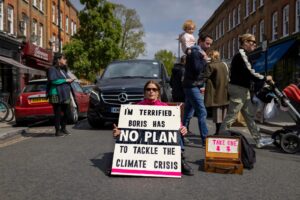 Governement, banks, big corporations and our “captured” billionaire-owned media – even our legal system – are doing nothing to protect us. Worse than nothing, they continue to pump billions of pounds into the fossil fuel industries and fail to invest as they should in cleaner more efficient technologies. We hear lies and empty rhetoric, but no action.

This is crunch time. If we continue on this path the most likely outcome is the total collapse of our global civilisation, with crop failures, water shortages, and enforced mass migration from the global south. We are talking about the collapse of whole continents and multiple unstable states, resulting in military conflict and billions of people needing to move in order to survive. We need drastic action, a swift and radical decarbonisation of our economy – not deadlines pushed down the road, to 2030, 2040, or 2050 which are all too late.

Sir James Bevan, CEO of the Environment Agency says “ Let’s be clear: runaway climate change will kill our planet and our people. It is the unseen pandemic”.

I am terrified and ashamed that those living in the global south who have contributed least to global warming and the loss of biodiversity are paying the highest price. But still we do nothing, worse still we create a hostile environment and close our borders to them.

We’ve had 50 years of warnings. We’ve had science proving the urgency of change. We’ve had economists pointing out that, not only can we afford it, it’s cheaper to act early. And yet, the reality is we’ve done pretty much nothing to change course. We’re not even slowing down. Last year on climate, for example, we had the highest global emissions ever. The story on food, on water, on soil, on climate is much the same. 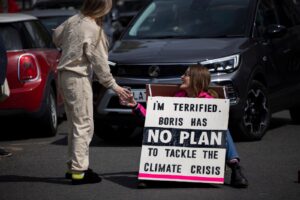 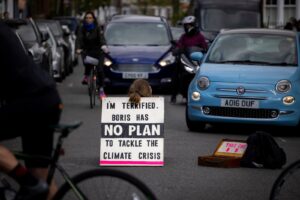 Our leaders have no plan, no imagination and no political will for change. So we need push for the change.

Paul Gilding, ex head of Greenpeace says “ That is why movements like Extinction Rebellion, Greta Thunberg, and The School Strike etc,., are so important – you have to put pressure on goverments to act”.

Will you help me put pressure on our government to act? We will need every entrepreneur, every scientist, every communicator, every artist, mother, father, and child to stand up and demand action.

Creating a liveable future will be above all, a work of the imagination.

We have a decade, let’s get to work.

Hannah and Katie are two of the Lambeth Rebels  who took part in the wave of lone road blocking being carried out by thousands of rebels across the country, and the world, to raise the alarm that government and business are completely failing to match their promises to cut CO2 emissions with radical and urgent plans to do so.

The nationwide actions were staged to mark the second anniversary of Parliament’s Declaration of a Climate Emergency. Boris Johnson recently announced that the UK would ‘toughen’ its climate targets, pledging to cut emissions by 78% by 2035, compared to 1990 levels.

‘The Prime Minister is making big promises, but two years have passed since Parliament declared a climate emergency and he and his government have done almost nothing to head off the very worst impacts of the crisis – drought, crop failures and war,’ says XR Lambeth spokesperson John.

‘In fact, they’ve launched a massive new road building campaign and given permission for a new coal mine, airport expansions and more oil drilling in the North Sea.

So, rebels in Lambeth, across the country, and across the world, have decided to literally use their bodies to signal to those in power that they need to take urgent action before it’s too late.

‘Imagine the level of desperation these brave people are feeling to sit, alone and vulnerable, in the middle of the road, blocking often angry motorists.

‘There is absolutely no way that anyone would do something as scary as this if they felt there was any other way to make the people in power take action over a crisis that threatens to destroy all of our futures.’ Three XR Lambeth rebels were arrested.